The first signs of spring are starting to appear around here…

My zippy little red car made its first appearance out of the garage since November? December? Something like that. And even better, the battery was still live and rarin’ to go! I didn’t have to jump it or hook it up to the trickle charger. Got lucky this year (because I forgot to hook it up when I parked it when the snow started flying).

I’ve also got a new backyard grill on order that will be delivered on Saturday. The old one decided to give up and die over the winter, and after 7 years, it’s time to just let it go and get a new one. I’m really looking forward to the first few steaks on the new one. I’m hoping the weekend cooperates just enough to let us out there to fire it up!

My truck spent some time in the shop yesterday. Nothing was wrong with it, but I needed to get the tow hitch mounted.

That’s so I can tote and haul the new toy around! 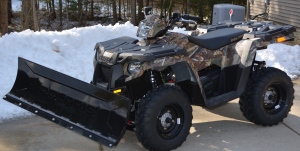 (And yes, I just had to pose it in front of some of the snow I’ve been pushing with it all winter long. But the latest batch of snow sure didn’t last long. It got into the upper-50s today. Spring is on the way!)

I’ll blame it on being tired. Well, beyond tired, really…exhausted and not thinking straight. Even though I have to admit that I let myself in for all of this mess, I still say it wasn’t really my fault.

I’d gone to pick my guy’s mom up when she called, just as I was ready to lay down for a nap. I still hadn’t slept after my night shift, and by the time I’d dropped her home after a stop or two, it was well after 4pm. I was hungry and I thought food would keep me going for a while longer. There was a sushi place just a little north of where I was, so I headed there. I figured I could get a quick bite and then get home and crash.

Unfortunately, the place was packed. There must’ve been a party going on, but all of the tables were taken, and I was told there’d be quite a wait. “But hang on. If you want, we can seat you now on the hibachi side,” said the hostess. “Alright,” I said, thinking, “How bad can this be? Hot food, fixed for me… Sounds great!”

When the chef was tossing egg into people’s mouths, the 6 year old to my right got a bit rowdy. He jumped up and backwards on his chair, flipping himself and it all the way over and smashing it. He bounced up. The chair didn’t. It lay in smithereens, to be picked up and brushed aside, replaced by a new chair. He tried it again, but his dad caught the chair just before it toppled the second time. (Neither time did he catch the egg, of course.)

The 10 year old to my left wasn’t quite that bouncy, but he couldn’t hold on to his silverware to save his life. I quit counting after his fourth fork hit the floor. The waitress ended up just bringing a stack of forks for him to use. (I suppose I should be glad he wasn’t learning chopsticks that night.)

As for me? Apparently I wasn’t paying enough attention to the chef at one point, because he threw an onion slice at me and hit me dead on in the chest. I about went backwards in my chair from surprise at that!

But the food was good, and I had enough left for a snack later that night. I’ll just have to remember to pay attention at all times if I go back there.

Electricity is Not Your Friend

Last night at work came within a hair’s breadth of getting far more interesting than usual.

I was paged overhead to the resuscitation room. As I ran down the hallway, as I got closer to the room, the air carried a very strong scent of something burning. This is never a good thing in the middle of the night in the ER.

I came around the corner and into the resus room to find a little one with difficulty breathing. The smell of burning was even stronger in the room than in the hallway outside, so one of my first thoughts was “house fire?” but the family only looked confused when asked and denied that they’d been anywhere near anything burning. It’s been far too cold to be at a bonfire, so I crossed that off my list, but the smell still worried me, and it certainly wasn’t helping with the little one’s breathing problems.

Finally one of our security guards came by the room and beckoned to me. He was trying to track down the smell, and it has been narrowed down to this small hallway. I told him that my patient had not been in a house fire, so he went into the other rooms on the hallway.

He immediately came back from the next room over.

I had just about the entire staff of the ED in that resuscitation at that moment. If that oxygen tank had blown… Talk about “living in interesting times”.