Over the past month, because of being gone for a conference and being gone visiting family (various iterations), I’ve developed a backlog of New Guns (ok, Guns New to Me) that needed to be taken to the range.

Today was the day.

The S&W 52 has been waiting the longest for its range trial, mainly due to the difficulty of finding .38 full wadcutters. They had to be ordered online, as none of the local gun stores carry them. But they had arrived and been stashed aside, in preparation for today. I’m still searching for a full instruction manual on the disassembly/reassembly of the gun, but I had been able to do at least some cleaning and oiling of it in the meantime.

It shoots a dream. The trigger exactly what you’d expect in a gun that was made for bullseye shooting, and it is indeed that accurate. My first 10 rounds, followed by a later 25 rounds.

Each magazine is limited to 5 rounds, so it’s easy to keep a round count. A box of 50 still goes way too fast. I’m going to need to quit caffeine on the days I want to shoot this one to its full potential!

Next up was the Colt Python…my first revolver. The grip is very different, speaking as someone who is used to only shooting semi-automatics, but I got the hang of it quickly. Sorry, OldNFO…I’m keeping this one! This is a shot of the first 20 rounds through that one. 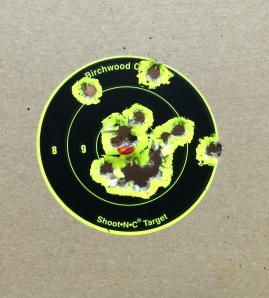 I must say…it shoots amazingly well!

And here’s a shot of the Python sitting with the BF’s Trooper. Sort of a family outing for the revolvers today.

The last new-to-me gun was the Colt Woodsman. Having only one magazine for it makes it a little cumbersome to put too many rounds through it, and it still needs a thorough cleaning, but it is a lot of fun. Finding the point of aim was a little more challenging on this one, because the sights are so tiny, but I got it nailed down fairly quickly. This is the first 10 shots through it.

All in all, a great day at the range!

There is a category missing from this list… Revolvers. Just never got into them, despite the BF’s love of them, and despite having been privileged to shoot many beautiful revolvers belonging to many of my friends. Besides, I figured that gave me at least one category of things that I just wasn’t going to even look at when at the LGS or the gun shows. A “safe zone”, so to speak.

Well, that went right out the window yesterday. Following the example of one friend and aided and abetted by another friend,

this little beauty followed me home yesterday. And I think it’s a definite keeper!

It’s a 4″ Colt Python. Serial number dates it to 1980, and it’s just gorgeous! A little muzzle wear and a few scratches, likely from being carried in a holster, but aside from that the bluing is in great shape. The grips are nice and tight and without any chips or dings. I can’t wait to get out this weekend and put some rounds through it.

I’ve been meaning to finish organizing the safe and all of the ammo downstairs. That means doing a complete inventory of all of the calibers and types of ammo that I have, as well as where it is stored.

Today, that job got just a wee bit more complicated. Half a case of 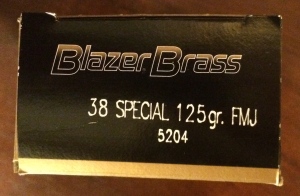 followed me home from the LGS.

Of course, that means that something else just might’ve followed me home, too…

Driving Home From My Parents’…

I apparently made one too many stops. It’s not a long trip, just over 200 miles, but there are a few tempting places to stop along the way.

At the Big Box Outdoor Store, there were several very tempting guns, but they were seriously overpriced (probably by at least 1/3, from what I could figure), even if old Colts and S&Ws do make me drool. I kept my hands (and my wallet) in my pocket and kept on driving.

Then I made the “mistake” of stopping at the main branch of our Local Gun Store. Their used gun case is a toss-up. Some days, it’s nothing but Glocks; other days, a real gem is hiding with its snout poking out just far enough to be seen between all of the others.

This one was hiding almost all the way back on the bottom shelf, but it stuck out just far enough to be noticed. A little beat-up; a little dirty; a lot old…but what a beauty to find tucked under there!

It’s a first series Colt Woodsman, with a SN that dates it to around 1921, from the best I can figure. Definitely needs a good cleaning, but I’ve found instructions for how to dismantle it and get it back together successfully. I’ll also need to start hunting for more magazines (yes, I know…might as well wish for unicorn farts!). But I’m really looking forward to seeing this in action!